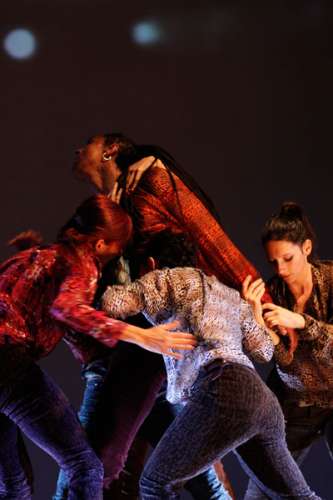 Seduced by Jim Morrison’s poetical strength, one of the most irreverent icons of the 60s, and by its posthumous release of An American Prayer, the choreographer Paulo Ribeiro allowed himself to be lead by the words and spirituality of the musician to reflect on the role of each individual in its relationship to the world and the role of dance.

Loyal to Jim Morrison’s universe, but free in his rescue of an inner self when in eminent danger, he has built a playground in the need for each individual to rethink himself as a collective being and to have time to listen to himself. Embedded in the will foe being distinct and to transform, the play is inhabited by constructed and deconstructed sensations orbiting an epoch, politics, abandonment, concern, but also something festive and deeply humane.

Morrison’s accomplice, but emancipated through the game of bodies, Paulo Ribeiro opposes what could be seen as the interior annihilation, fed by the ghosts of the world’s unsustainability; provoking a collective apology and sowing some benevolent accidents, intended to shake the audience’s perception, just as in the style of this organic and active type of dance.

(...) What is particularly interesting in JIM is not how these bodies can correspond to a utopic materialization of the revolution started by Jim Morrison (or projected upon him), intuitively or unconsciously. The most interesting about JIM - or what makes this work even more interesting - is how this revolutionary ambiguity in which the bodies abide in these days is exposed, running hastily towards ill-founded expectations or giving up, protected by a fatigue disguised as anarchy. (…) - Tiago Bartolomeu Costa, in Público

After a vast experience as performer, Paulo Ribeiro started to choreograph in 1984 at the 1st Biennalle Off, in Lyon (France). He later created and reposited works for several acknowledged companies, such as Nederlands Dans Theater, Grand Théâtre de Genève, Centre Chorégraphique de Nevers and Ballet Gulbenkian. And most recently, he has worked with Ballet de Lorraine, Grupo Dançar com a Diferença and the Portuguese National Ballet.
In 1995, he founded his own company for which he has made several original pieces to critical acclaim both nationally and internationally. Alongside his choreographic activity he also was the Director of the cycle Dancem! of Teatro Nacional São João, in Oporto, in 1996, 1997, 2003, 2009 and 2011; Artistic Director of Ballet Gulbenkian, between 2003 and 2005; General Manager and Program Manager of Teatro Viriato, in Viseu, between 1998 and 2003, and again since 2006.

With the support of the Culture Programme of the European Union. This project has been funded with support from the European Commission. This publication (communication) reflects the views only of the author, and the Commission cannot be held responsible for any use which may be made of the information contained therein.